30M chart of the EUR/USD pair

The EUR/USD currency pair started a new round of upward movement inside the horizontal channel on Monday. This time the price failed to overcome the level of 1.0156, which was followed by a rebound on Friday, after which a new round of growth began for the euro. Of course you can’t say that the single currency’s growth on Monday was triggered by some event or justified fundamentally. It’s just that the pair has been inside the flat channel for a month, how else can it move inside this range? Recall that the real boundaries of the horizontal channel pass approximately at the levels of 1.0120 and 1.0280. That is, the width of the channel is about 160 points, which makes it quite spacious and free. Thus, the only thing that can be said now is that the pair is likely to continue its upward movement, to the level of 1.0269. We do not even expect that important fundamental or macroeconomic events will somehow contribute to the pair leaving the flat. By the way, there will be very few such events this week. We believe that the pair will leave the horizontal channel as unexpectedly as possible for the traders themselves, but still, it is worth waiting for this moment, since it has always been very difficult to trade inside the flat.

5M chart of the EUR/USD pair 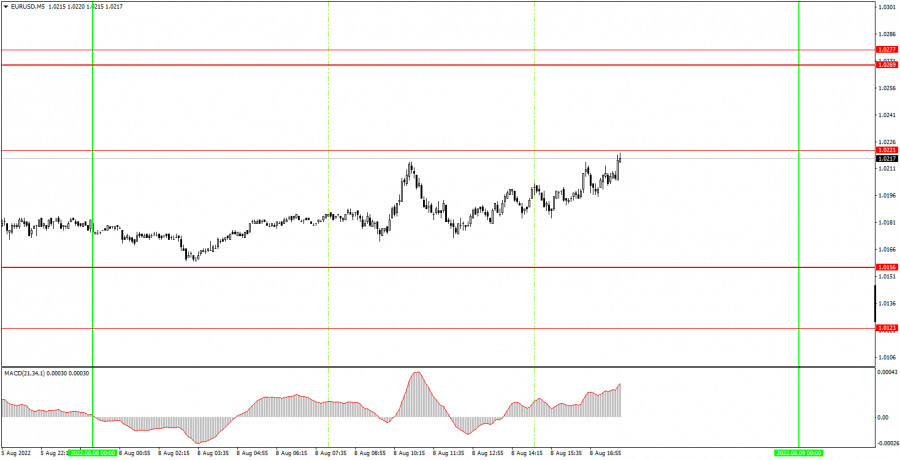 It is clearly seen on the 5-minute timeframe that the pair did not stand in one place all day, but at the same time it was not even able to work out a single level in order to form at least one trading signal. From our point of view, this is even for the better, since in a flat there is always a high probability of forming false trading signals, and today the pair’s volatility was only 60 points. Therefore, novice traders definitely did not miss a lot. The quotes still rose to the level of 1.0221 late in the evening, but this signal should not have been worked out, since it was formed too late. As a result, not a single trading signal for working out was received, therefore, beginners should not have opened a single transaction today. There may be a similar situation on Tuesday, but, most likely, the price will cross some level on Tuesday. We remind you that now the probability of generating false signals is high.

How to trade on Tuesday:

The upward trend has now been canceled on the 30-minute timeframe, and a new downward trend has been formally formed instead. However, by and large, the pair has been trading inside the horizontal channel for almost a month, which we have repeatedly mentioned in our other articles. It is perfectly visible on the 4-hour timeframe, we recommend paying attention to it on the higher timeframe. On the 5-minute TF on Tuesday, it is recommended to trade at the levels of 1.0072, 1.0123, 1.0156, 1.0221, 1.0269-1.0277, 1.0354. When passing 15 points in the right direction, you should set Stop Loss to breakeven. Neither the US nor the European Union again scheduled any important events or publications. However, this is clearly not a problem for the euro, since it has been trading in the horizontal channel for almost a month and is unlikely to be able to leave it on Tuesday.

Basic rules of the trading system:

1) The signal strength is calculated by the time it took to form the signal (bounce or overcome the level). The less time it took, the stronger the signal.

2) If two or more deals were opened near a certain level based on false signals (which did not trigger Take Profit or the nearest target level), then all subsequent signals from this level should be ignored.

3) In a flat, any pair can form a lot of false signals or not form them at all. But in any case, at the first signs of a flat, it is better to stop trading.

4) Trade deals are opened in the time period between the beginning of the European session and until the middle of the US one, when all deals must be closed manually.

5) On the 30-minute TF, using signals from the MACD indicator, you can trade only if there is good volatility and a trend, which is confirmed by a trend line or a trend channel.

6) If two levels are located too close to each other (from 5 to 15 points), then they should be considered as an area of ​​support or resistance.

Support and Resistance Levels are the Levels that serve as targets when buying or selling the pair. You can place Take Profit near these levels.

Red lines are the channels or trend lines that display the current trend and show in which direction it is better to trade now.

The MACD indicator (14,22,3) consists of a histogram and a signal line. When they cross, this is a signal to enter the market. It is recommended to use this indicator in combination with trend lines (channels and trend lines).

Important speeches and reports (always contained in the news calendar) can greatly influence the movement of a currency pair. Therefore, during their exit, it is recommended to trade as carefully as possible or exit the market in order to avoid a sharp price reversal against the previous movement.

Beginners on Forex should remember that not every single trade has to be profitable. The development of a clear strategy and money management are the key to success in trading over a long period of time.