30M chart of the EUR/USD pair

The EUR/USD currency pair made a second attempt to overcome the level of 1.0359 on Thursday, but with the same success as the day before. The second bounce from this level shows that the euro is in no hurry to rise, and traders are in no hurry to buy it. Thus, the euro’s growth this week can only be linked to one event so far. This event is the US inflation report, which was released on Wednesday. The US currency plunged by 160 points after it was released. And there were no more important news or events this week. Thus, traders also had nothing to react to. And not only today, but also on Monday, Tuesday and Wednesday. That is why we question the euro’s ability to continue to rise in price against the dollar. After all, we are talking about only one report at this time. Yes, it was frankly not in favor of the US currency, but this is just one report. The euro was traded sideways until Wednesday for almost a month, and even the meetings of the European Central Bank and the Federal Reserve could not bring it out of the flat. And then one bad report and the dollar falls into the abyss? And no one remembers the strongest NonFarm Payrolls report, which was released last Friday, but provoked a very moderate strengthening of the US dollar… There is no trend line or channel on the 30-minute timeframe.

5M chart of the EUR/USD pair 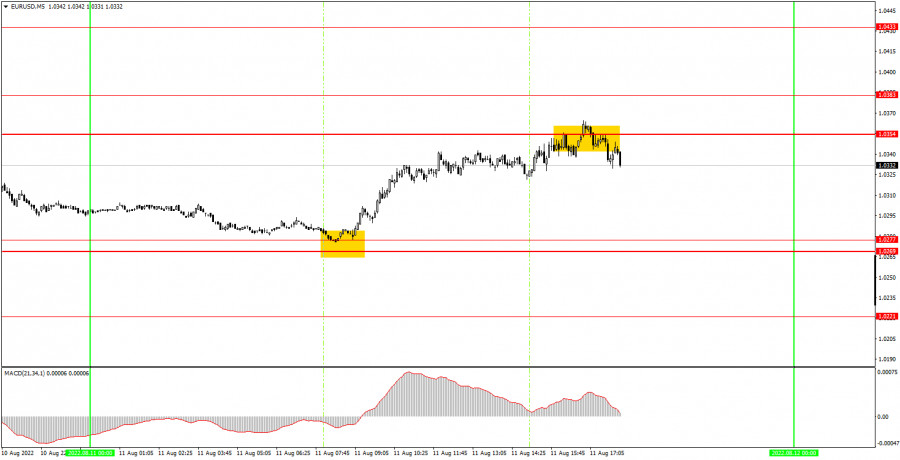 Thursday’s move was almost perfect on the 5-minute timeframe. First, it was trending during the day. Secondly, the pair almost moved only in one direction the whole day – up. Thirdly, the day’s trading signals were almost perfect in terms of accuracy. The first buy signal was formed near the level of 1.0277, from which a rebound followed. After this rebound, the price rose exactly to the nearest target level of 1.0354, from which it also rebounded. Novice players had to work out this signal with long positions, which should have been closed near the level of 1.0354. The rebound from 1.0354 could also be worked out theoretically, but in the late afternoon the short position had to be closed manually. As a result, two signals, two deals, both profitable, the total profit was 50-60 points. With a total volatility of 90 points, this is an excellent result.

How to trade on Friday:

The pair finally left the horizontal channel on the 30-minute timeframe. It is very difficult to say how long the euro’s growth will continue now. Despite the very zealous and eloquent reaction of the market to the inflation report, there are still very few factors in favor of the euro. There is no upward trend line or channel right now either. The price needs to overcome the level of 1.0359 in order to continue rising. On the 5-minute TF on Friday, it is recommended to trade at the levels of 1.0221, 1.0269-1.0277, 1.0354, 1.0383, 1.0433, 1.0465. When passing 15 points in the right direction, you should set Stop Loss to breakeven. The EU is set to release its first report this week – on industrial production. Meanwhile, only the consumer sentiment index from the University of Michigan will be published in the US. Both reports cannot be considered important.

Basic rules of the trading system:

1) The signal strength is calculated by the time it took to form the signal (bounce or overcome the level). The less time it took, the stronger the signal.

2) If two or more deals were opened near a certain level based on false signals (which did not trigger Take Profit or the nearest target level), then all subsequent signals from this level should be ignored.

3) In a flat, any pair can form a lot of false signals or not form them at all. But in any case, at the first signs of a flat, it is better to stop trading.

4) Trade deals are opened in the time period between the beginning of the European session and until the middle of the US one, when all deals must be closed manually.

5) On the 30-minute TF, using signals from the MACD indicator, you can trade only if there is good volatility and a trend, which is confirmed by a trend line or a trend channel.

6) If two levels are located too close to each other (from 5 to 15 points), then they should be considered as an area of ​​support or resistance.

Support and Resistance Levels are the Levels that serve as targets when buying or selling the pair. You can place Take Profit near these levels.

Red lines are the channels or trend lines that display the current trend and show in which direction it is better to trade now.

The MACD indicator (14,22,3) consists of a histogram and a signal line. When they cross, this is a signal to enter the market. It is recommended to use this indicator in combination with trend lines (channels and trend lines).

Important speeches and reports (always contained in the news calendar) can greatly influence the movement of a currency pair. Therefore, during their exit, it is recommended to trade as carefully as possible or exit the market in order to avoid a sharp price reversal against the previous movement.

Beginners on Forex should remember that not every single trade has to be profitable. The development of a clear strategy and money management are the key to success in trading over a long period of time.